The conditioned flour is now travelling from the conditioner to the “barrel”, which is highlighted in blue on the first image. 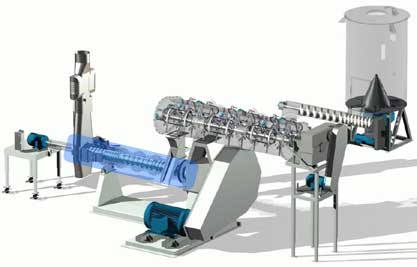 The barrel has an Archimedes screw in it which pushes the flour towards the end of the barrel on which a die-plate has been placed.

On the image below you will find from left to right: a part of the screw, the tip of the knife-blades and the outside of the die-plate.

Both the gap between the screw and the barrel as well as the holes in the die-plate are very small which allows the pressure inside the barrel to rise above 90 bar. 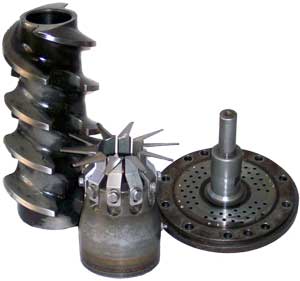 The friction which occurs makes temperatures rise above 100°C. The barrel has a double mantle and with a powerful water-cooling the heat can be reduced to ± 60°C. Cold extrusion is used for certain feeds (e.g.: broodstock feeds).

The high pressure and temperature which occur in the “barrel” will then release the starch. This makes the starch easier to digest for the animal and it gives the grain a stronger structure due to the binding properties of released starch.

When the conditioned flour leaves the barrel through the mold, the pressure drops back to atmospheric level in a split second. This will make the dough swell to its final width. The pressure drop will also make the water inside the pellet cook and evaporate immediately which will create a centrifugal force. The vapor leaves the pellet quickly and by pulling matter along with it, it will further enhance the swelling process.